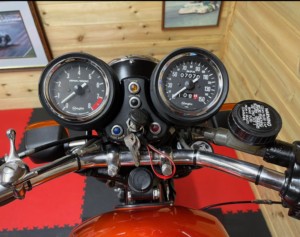 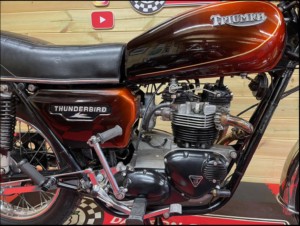 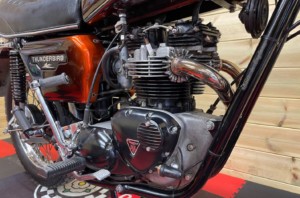 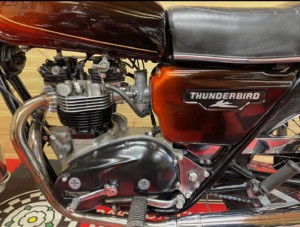 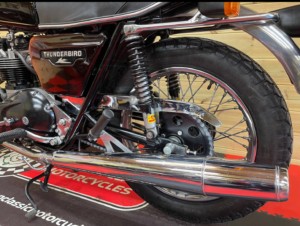 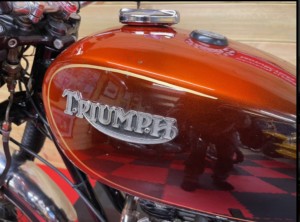 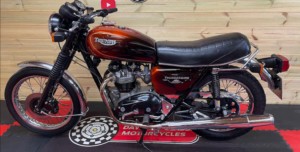 Here we have a lovely unrestored original example of the Triumph Thunderbird TR65 from 1982, we have given her a full service and valet ready for the new owner. Take your time to study the pictures and video of this time capsule of a bike and notice the wonderful orange and black paint complete with hand painted pinstripes! With only 7,000 miles on the clock there isn’t going to be many left in this amazing condition.

In 1981 Triumph reintroduced the 650cc model, a capacity it had last offered in 1975, by combining the 750cc T140’s 76mm bore with a new, short-stroke, 71.5mm crankshaft. Intended as an affordable, entry-level model, the Thunderbird came with satin-black engine cases, two-into-one exhaust system, drum rear brake, single carburettor and no rev counter, before a swift rethink saw the MkII version emerge with polished cases, twin exhausts and a rev counter. It would seem though, that the final specification was not exactly written in stone, as cash-strapped Triumph would happily supply machines with any option the customer desired. It is estimated that a mere 400-or-so TR65s were produced before the Meriden closure in 1983, and today this rare, last-of-the-line 650 is becoming increasingly sought after by the serious